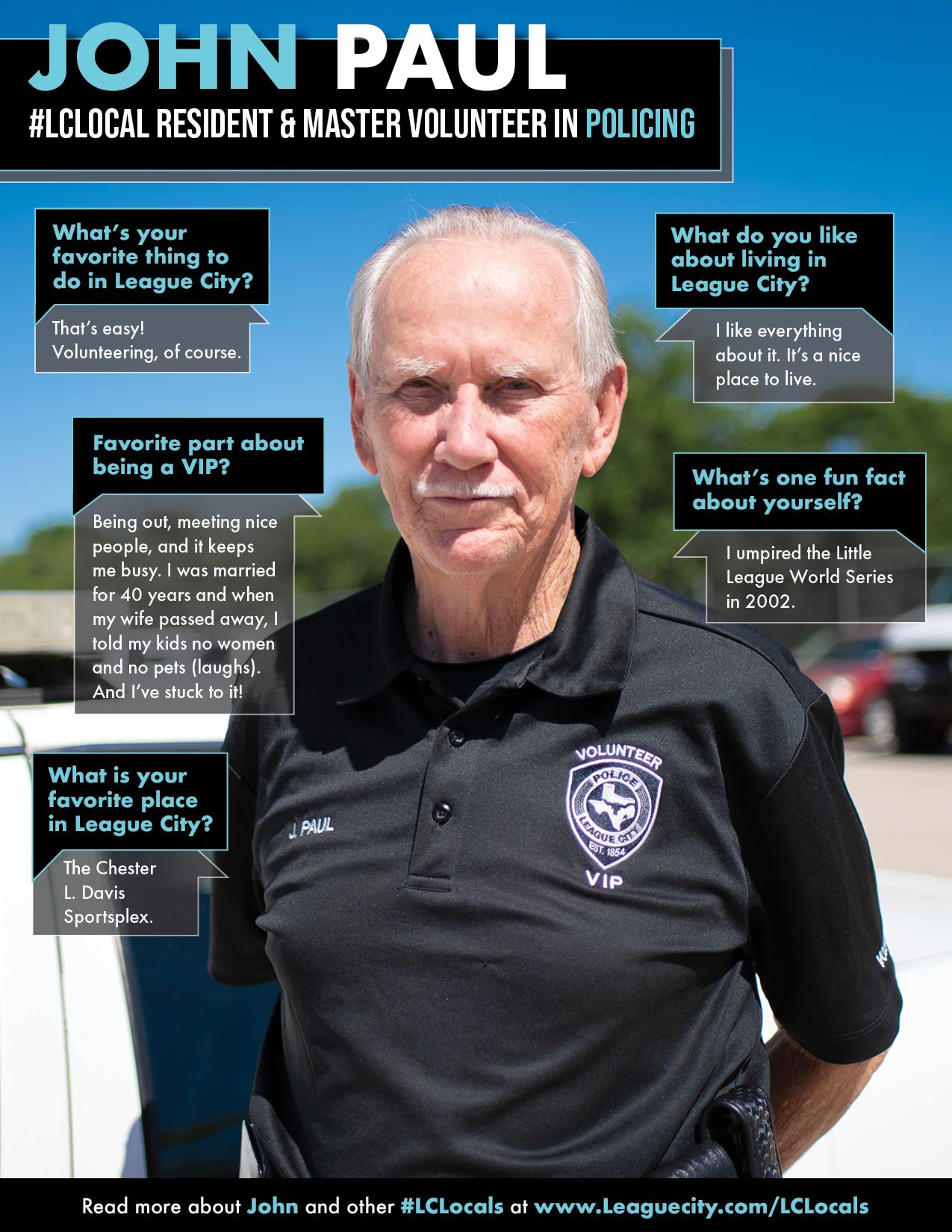 How did you become a Master Volunteer in Policing (VIP) for League City?

I got involved after being part of the Citizens’ Police Academy in 2013. I transitioned over from CPA. I wanted to know more about the City’s police department and to get involved, so a friend of mine suggested that I join the group.

What do you do?

I coordinate the VIP cars and handle their maintenance, I coordinate code enforcement with Neighborhood Services, help schedule golf cart inspections, and work traffic at city events. I like to patrol and meet different people.

Favorite part of being a VIP?

Being out, meeting nice people, and it keeps me busy. I was married for 40 years and when my wife passed away, I told my kids no women and no pet (laughs).  And I’ve stuck to it. I sit home and I watch TV sometimes, but I try to stay busy at all times.

You also umpire for Little League in your spare time?

I played Little League in 1952. I made the all-star team and won our all-star games. After that, I coached until my son didn’t play anymore and I started umpiring in 1982. I’ve been the umpire supervisor for District 14 since 1986 and I’m the chief umpire now for Texas East. I umpired the Little League World Series in 2002 and umpired in Poland for the European Regionals that same year. I have always been into baseball since I was in high school.

You dedicate a lot of time to volunteering, what awards have you received?

I got the Art Hewitt Award in 2016 for all my volunteer service for the city, including Little League, the CPA, and VIP. I got the VIP of the year in 2017. I’ve volunteered a total of 3,400 hours with the League City Police Department and got the Chief’s Excellence Award in July.

I got the presidential award for the third time for volunteering more than 500 hours a year.

Right now, I am working to get to 4,000 hours to get a letter signed by the president.

What keeps you involved with the police department?

I was a deputy sheriff at one point in Delaware. I’ve always had a love for law enforcement. My friends are police, I have family members in law enforcement, I’ve known police my whole life.

How would you encourage someone to volunteer?

You have to have the time. If you have time and want to stay busy, you have an opportunity to work with different people and give back. It’s a lot of fun.

What’s your favorite thing to do in League City?

What do you like about living in League City?

I like everything about it. It’s a nice place to live.

What is your favorite place in League City?