Jane Doe has been identified as Audrey Cook. 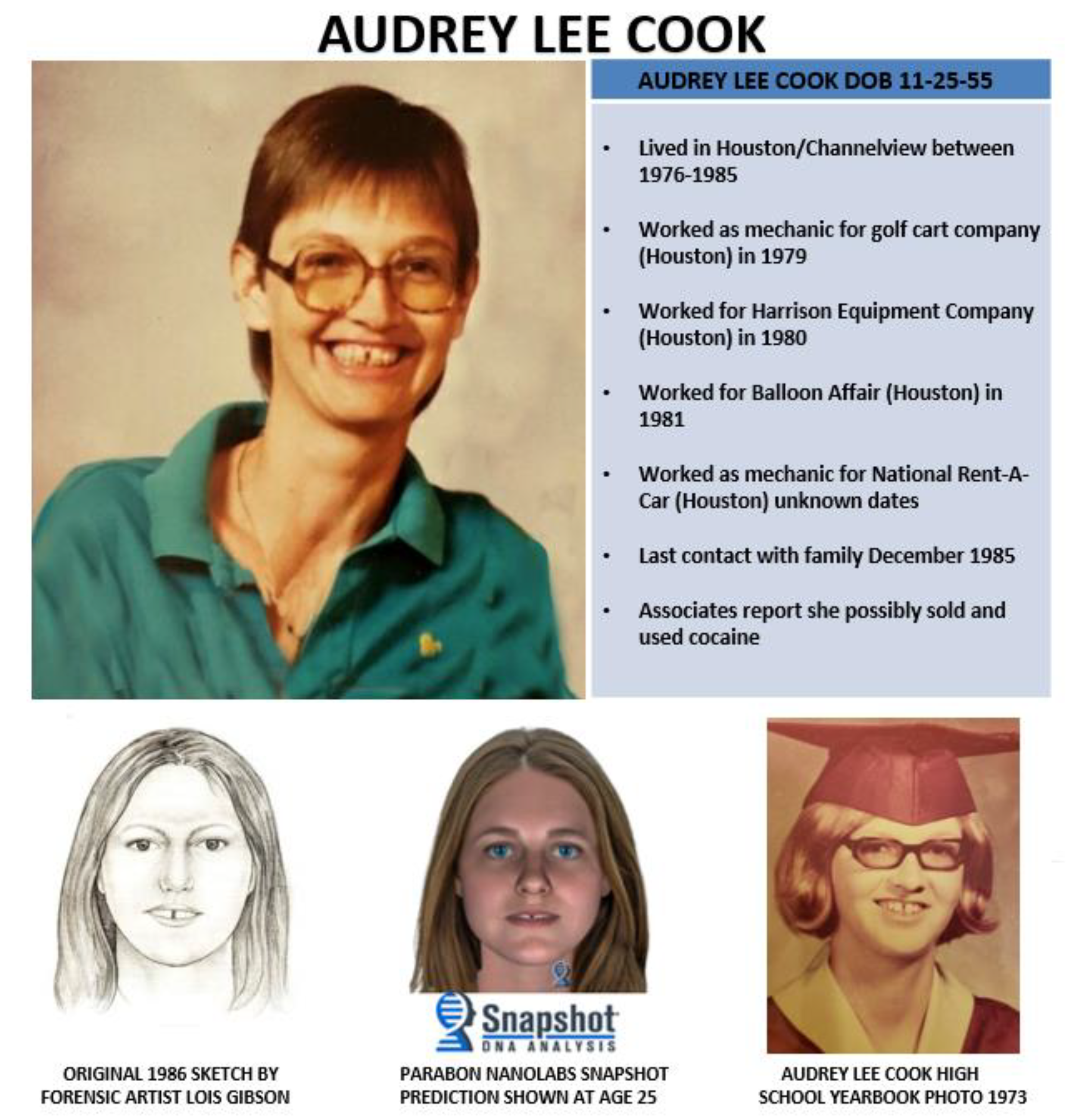 League City Police have identified two homicide victims from the decades-old Calder Road cases. The following is a timeline that leads up to the identification of Jane Doe and Janet Doe.

On April 6, 1984, the remains of 25-year-old Heidi Fye were discovered after a family’s dog brought partial skeletal remains to its home in the 1300 block of Ervin Street. A search was conducted of the wooded area between Ervin Street and Calder Road and the rest of the remains were located and identified.

February 2, 1986, two male juveniles were riding bikes in a field off of Calder Road when they found the remains of two female victims in close proximity to each other. Detectives worked with the Galveston County Medical Examiner’s Office in an attempt to identify victims. They were unable to identify the first victim and she was given the name “Jane Doe” by the Medical
Examiner’s Office. A short time after, the second victim was identified by dental records as Laura Miller.

On September 8, 1991, the body of a female victim was discovered by two people riding horses in a field near Calder Road. Again, Detectives worked with the Galveston County Medical Examiner’s Office in an attempt to identify the victim. After a thorough investigation, Detectives were unable to identify the victim, and the Medical Examiner’s Office gave her the name “Janet Doe.”

From the time the first victim was discovered in 1984, Detectives from the League City Police Department have been working diligently to identify Jane Doe and Janet Doe and follow leads in the search for a suspect or suspects in the cases.

Over the years, there have been several attempts to produce an accurate representation of what the victims looked like at the time of their death to assist with identifying Jane Doe and Janet Doe.

The Cold Case Detectives became aware of a company called Parabon Nano Labs that has the capability to use the victims’ DNA to provide a rendering that is a close representation of what the victims looked like at the time of their death. Detectives started the process of DNA extraction from the remains with DNA Labs International.

In April 2018, Detectives started working on the genetic genealogy of Jane Doe and Janet Doe with “GEDmatch”. Detectives pieced together family trees in an attempt to identify the victims. After months of constructing family trees, FBI Agent Richard Rennison offered his assistance through the use of Family Tree DNA (FTDNA) to compare the DNA profiles of our victims against the FTDNA database.

On January 29, 2019, Agent Rennison provided our Detectives with the results from the FTDNA comparisons.

Additional family matches for the victims were discovered in the FTDNA database and were instrumental in helping to complete the family trees for both Jane Doe and Janet Doe. Through this process, Detectives were able to identify and locate living family members from both victims. DNA samples were collected from the son and sister of Janet Doe, and Agents from the FBI coordinated the collection from the family members of Jane Doe who were out of state.

DNA comparisons from all the family members were conducted and positive matches were made. Detectives met with the Galveston County Medical Examiner and provided her with the findings. The Medical Examiner agreed with the results that she was provided and has begun the process to amend the death certificates.

Since the identifications have been made, Detectives have continued their investigations, and the following information has been discovered about each victim:

Jane Doe has been identified as Audrey Lee Cook.

Janet Doe has been identified as Donna Prudhomme.

League City Police are asking that anybody who knew or had personal knowledge of either Audrey Cook or Donna Prudhomme around the time of their deaths or has information that will help further the investigation of these cases to please contact the League City Police Department Cold Case tip line at 281-338-8220.