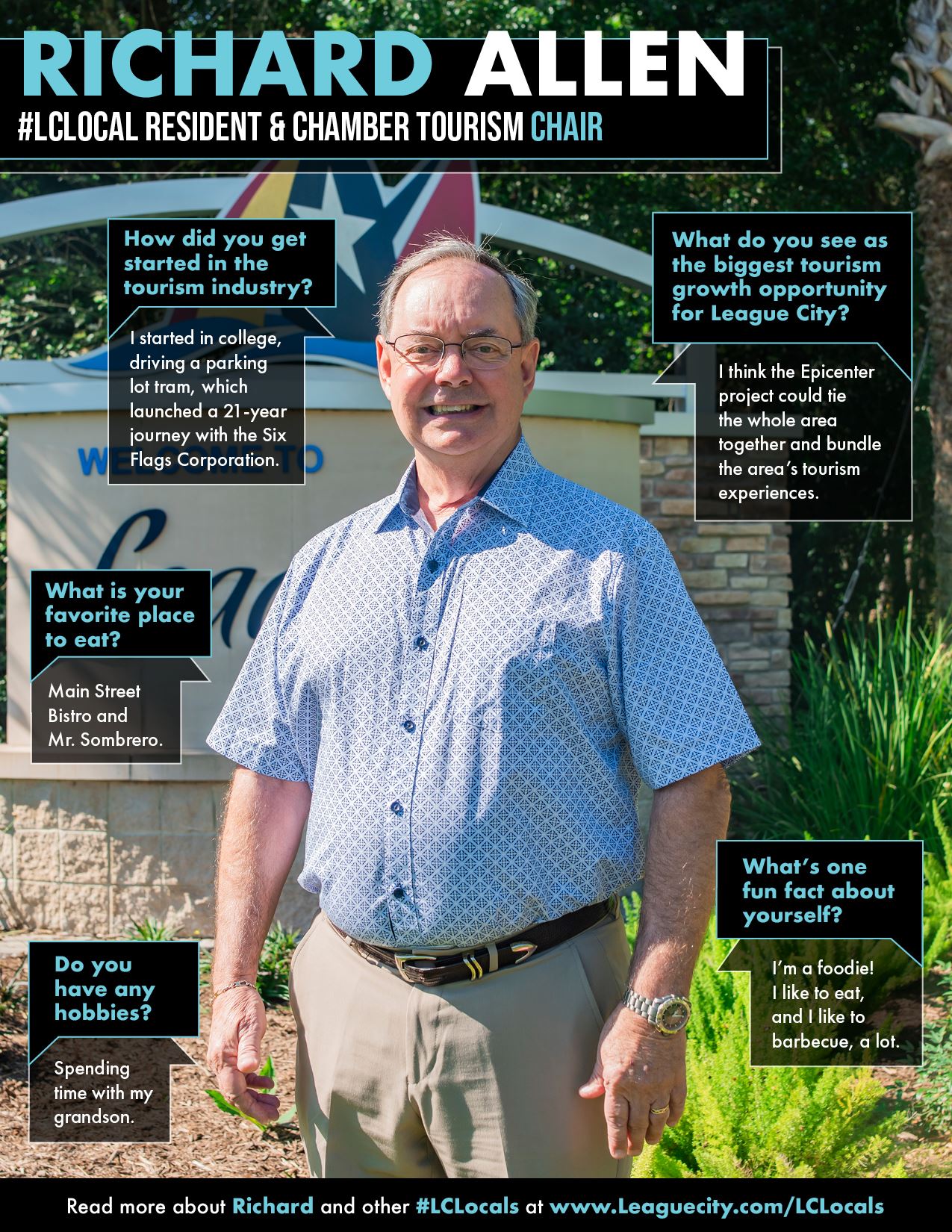 What led to your involvement in the League City Regional Chamber of Commerce Tourism Committee?

After spending more than 21-year in the tourism industry in Bay Area Houston running Space Center Houston, my wife and I had this notion that we would retire to Florida. After 3-years in “retirement,” we realized we missed our family and friends and returned to make League City and the Bay Area home. Upon my return, I contacted the Chamber of Commerce seeking to get involved in the community. Due to my background in tourism, I was asked to serve on and then eventually to lead the Chamber’s Tourism Committee.

What is your background in the tourism industry?

I started in college, driving a tram in a parking lot at Six Flags Over Georgia, which launched a 21-year journey with the Six Flags Corporation with various roles and responsibilities including running Six Flags Atlantis in Hollywood, Florida. I also had the opportunity to run the U.S. Space and Rocket Center in Huntsville, Alabama, before being approached to run Space Center Houston. During my 21 years at Space Center Houston, I had the privilege to serve on various Chamber Committee’s, the Bay Area Economic Partnership, and the Board of Directors of the Texas Travel Industry Association (TTIA).

Where do you see tourism going for League City and the Bay Area?

Upon our return from three years in Florida, I noticed the maturation and the building up of this area’s tourism assets was phenomenal. When I was at Space Center Houston, we received a lot of feedback that people liked this area because it was centrally located between Houston and Galveston and provided a great base for tourists to explore. I think the League City Chamber has seized upon that vision and is helping to craft a plan that will support our hotels, restaurants, and attractions by promoting a convenient, family-friendly environment.

What do you see as our biggest single tourism opportunity in League City?

I think the work that League City is doing on Epicenter could be a big project that ties the whole area together and gives League City a competitive advantage and bundle tourism experiences to draw visitors to the area. If we can all work together and highlight these properties and attraction’s we don’t have to create anything, it will already be here.

I’m a foodie! I like to eat, and I like to barbecue, a lot. I have never competed in a cook-off, but I think it would be something really fun to do. I also like to take cruises with my wife. We have taken several cruises and we have really enjoyed that.

Do you have any hobbies?

I don’t really have any hobbies, but I do have a grandson that I enjoy spending time with, so anything that he has going on I like being there to support him.

What is your favorite League City restaurant?

It’s hard to pick just one so I would say Main Street Bistro and Mr. Sombrero.