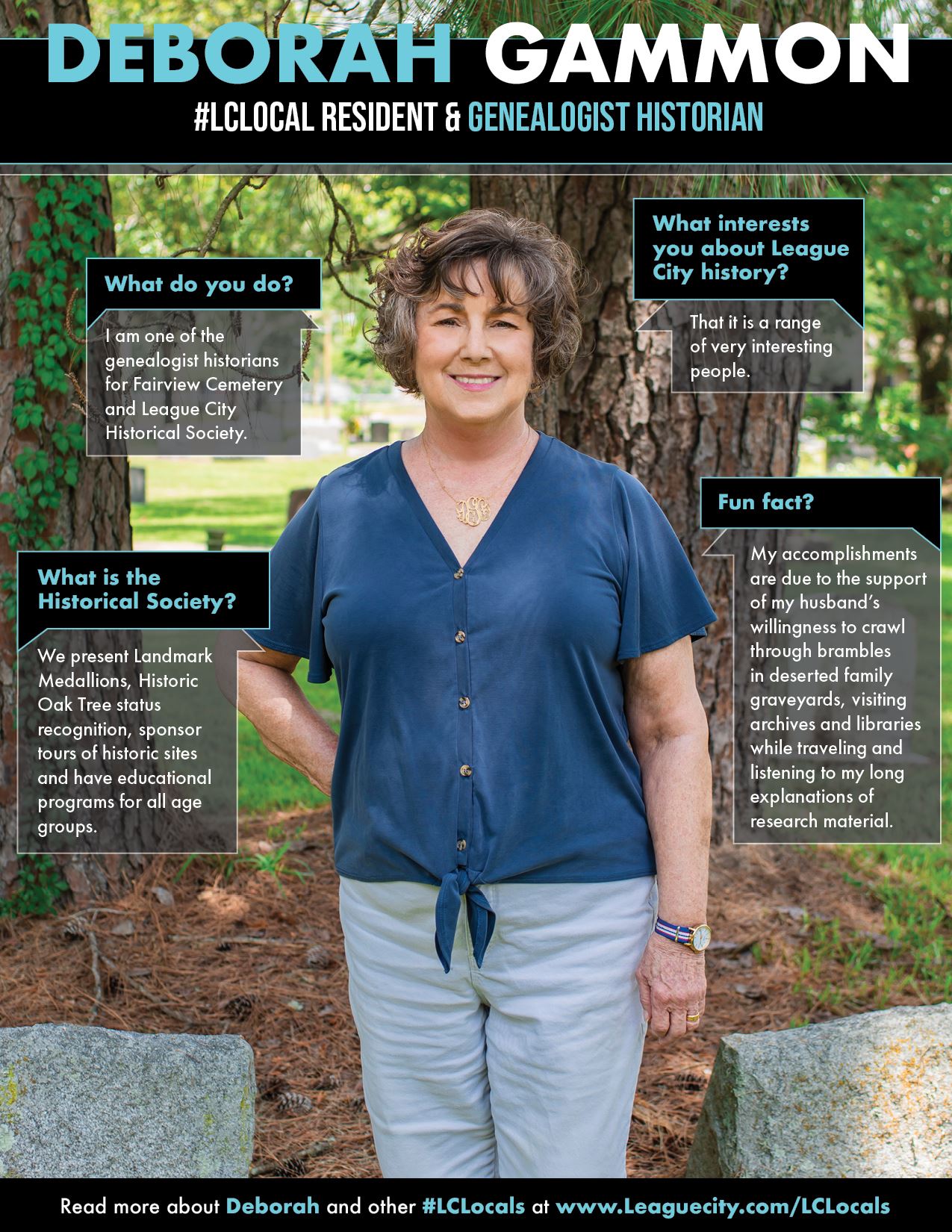 What do you do?

I am one of the genealogist historians for Fairview Cemetery and League City Historical Society.

What is your background?

I’m the middle child of 5 children born in Tarboro, Edgecombe County, North Carolina to a WWII Navy Veteran and a housewife. I attended schools in Rocky Mount and Washington, North Carolina before graduating and working for Carolina Telephone & Telegraph Company in Tarboro. I grew up around Historical Homes as Tarboro, the County Seat has a 45 block Historical District with 300 structures on the Register. As you can see, I learned to love history from an early age. It’s inbred.

After I met and married my husband who worked for IBM Corp., we moved around a lot for his career living in 9 cities in 8 states. We have two boys, one who works in Denmark and the other who is locally employed.

What organizations are you involved in?

I have joined the National Society Daughters of the American Revolution since arriving in League City. I belong to Sam Houston Chapter and work within its tenants on Historical Preservation. I’m also a member of the UDC, Fort Virginia Point Chapter and have researched my Confederate ancestors who lived in North Carolina. I’ve even discovered that a couple came to Texas after the Civil War.

How did you become involved with the League City Historical Society?

I joined LCHS soon after moving here. In 2006, I helped the curator, Catharin Lewis write a book on the Civil War veterans interred in Fairview. Since she’s from the North, she wrote about the Federal veterans and I wrote about the Confederate veterans. We did a “Ghost Tour” of Civil War veterans in October of that year. I continued doing the “Ghost Tours” for some years. The last one I did was in 2018 of the WWI veterans buried in Fairview. These are not scary tours but informative storytelling of the people interred in Fairview. The information is gleaned from researching census records, city directories, death certificates and obituaries on the selected individuals.

What is the Historical Society?

The LCHS is a not for profit 501c3 organization that holds general meetings, presents Landmark Medallions, Historic Oak Tree status recognition, sponsors tours of historic sites with their Christmas Home Tours and educational programs for all age groups in the community. The LCHS runs the West Bay Common School Museum with programs aimed at school children to learn about the schools of yesteryear, particularly 1898. They are taught by historically dressed Marms who teach them the lessons of the era of the school.

Tell us about the Fairview cemetery:

Fairview Cemetery is a Historical Cemetery that was established in 1900 shortly after the 1900 Storm. One of the first burials was Lottie Natho, a 9-year-old little girl that died of diphtheria following the storm. Our most recent burial was Dick Thomson, a WWII Pearl Harbor causality who was finally laid to rest with his family.

It is owned and operated by the not for profit 501c3 Fairview Cemetery Group, Inc. whose president is John Schoellkopf. We always celebrate Memorial Day in May led by the American Legion Post No. 554 and have Wreaths Across America in December led by Sam Houston Chapter NSDAR.

Fun fact about the Fairview Cemetery?

Some of the remains were moved from the Bradford/Kipp family cemetery in Kemah and stones date to the period of time before the establishment of Fairview.

And, I learned in doing research on the Civil War veterans that many of the children of the veterans married children of the opposite side whether it was daughters of Confederates marrying Yankees or vice versa.

Do you give tours?

I can.  I have in the past. If someone would like to schedule a group tour, they would need to arrange it with the President of Fairview, John Schoellkopf by calling 713-373-7292 or email me at gammondc@gmail.com and I am willing to do that. There will be a charge for the tour. The charge would be $5 a person with a minimum of 10 people. No individual tours.

What interests you about League City history?

That it is a range of very interesting people; some people in Fairview were victims of murder, some were the ones that committed the crimes. There are the pioneers of this town and surrounding villages and owners of the historical homes of this town.

How can somebody learn more League City history?

I’d like to invite them to join LCHS and attend the very informative programs that are given each month on local history. To do so, please contact LCHS:

Do you have any hobbies?

Yes, Genealogy. I research my own family from North Carolina.  I love to sew and travel.

What do you love about League City?

Fun fact about yourself:

I’m my own 5th cousin, my mother is my cousin and my children are my cousins. That happens when families intermarry. And it happened a lot.

My accomplishments are due to the support of my husband’s willingness to crawl through brambles in deserted family graveyards, visiting archives and libraries while traveling and listening to my long explanations of research material. He’s the best. I also have great support from my friends in League City.