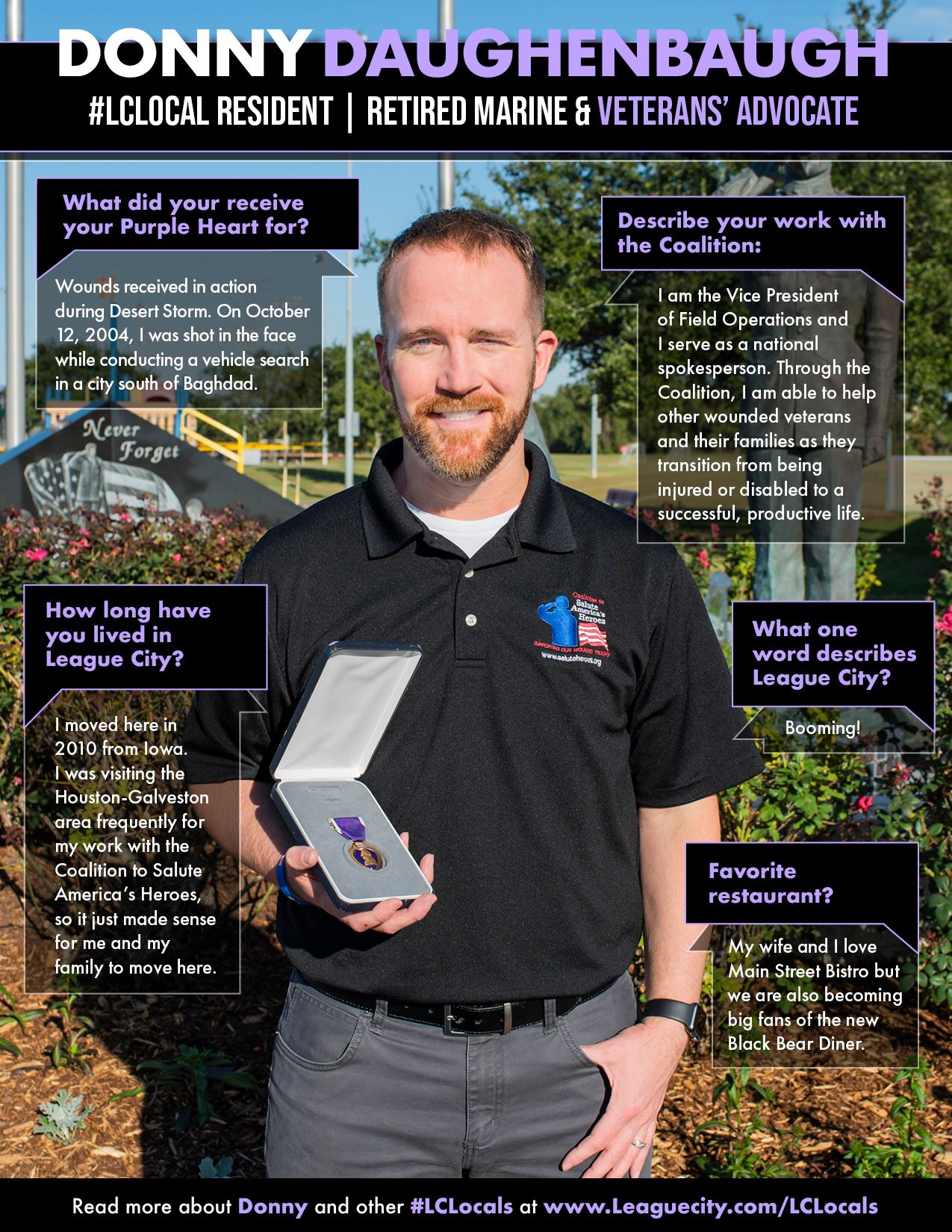 What did you receive your Purple Heart for?

I was deployed with the 24th Marine Expeditionary Unit in Mahmoudiya, a city south of Baghdad, when I was shot in the face during a vehicle search. My medal says for “wounds received in action during Desert Storm” and lists the date of October 12, 2004. That was the day I was shot. Wounded veterans and officers refer to the day of a near-fatal injury as a second birthday or alive day, because that is the day you came close to death but didn’t give in to your wounds.

It wasn’t easy and was quite lengthy. I still to this day have the bullet in my brain. They were unable to remove it. While my physical wounds have healed, I still suffer from others that are related to my cognitive and mental abilities. Regardless, I won’t let that stop me or slow us down. Being wounded in action has only shown me that being alive and having a beautiful family and living in League City is truly a gift. My wife Sarah and my three children Gabby, Kollin, and Everleigh inspire me to help others through my own story of recovery.

Did you always want to be a Marine?

I was in the Army ROTC in high school and I remember the day I saw the Marine Honor Guard perform during a ceremony. I knew at that moment that I wanted to join them. No one else in my family has ever been a Marine, so that intrigued me as well. I served for six years before my injuries forced me to retire. Now I serve other veterans who are injured.

Why do chose to help other vets?

When you are wounded and are faced with a long road to recovery, you become a self-advocate. I see it as my duty to share what I learned and picked up along the way with other wounded veterans so their journey can be a little easier.

I moved here in 2010 from Iowa. I was visiting the Houston-Galveston area frequently for my work with the Coalition to Salute America’s Heroes, so it just made sense for me and my family to move here.

Describe your work with the Coalition:

I am the Vice President of Field Operations and I serve as a national spokesperson. I originally began working with the Coalition during my own recovery efforts and over time I began helping other wounded veterans and their families make the transition from being injured or disabled to a successful, productive life.

What one word describes League City?

My wife and I love Main Street Bistro, but we are also becoming big fans of the new Black Bear Diner.

I love League Park because you don’t know everything it has to offer until you step inside. You can see the gazebo from the road, but when you park and walk around, there is so much more to see and do. My kids love the playground.