Ask someone the origin of League City’s name and they’re likely to tell you it’s related to a European unit of measurement, our community’s love for baseball, or even our proximity to the water—as in the Jules Verne novel, “Twenty Thousand Leagues Under the Sea.” But none of those explanations come close to the truth. League City is named after John Charles (J.C.) League, a wealthy Galveston businessman who never lived in our community but was instrumental in helping build it from the ground up.

In the early 1890s, J.C. League purchased a large portion of land along the east side of the Galveston, Houston, and Henderson Railroad tracks, which today are located near Highway 3. He then began to establish a community by dividing and selling lots of his land. He also donated portions for a school, a church, and a park. In 1893, League named his community after himself—League City.

While League was setting up his community on the east side of the railroad tracks, on the west existed a farming and ranching community originally known as Butler’s Ranch. The ranch was named after George Washington (G.W.) Butler who moved his family from Louisiana to Texas in the 1850s. As more families—mainly ranchers and farmers—settled around Butler’s Ranch, the community became known as Clear Creek.

From 1893 to 1902, the two communities (Clear Creek and League City) argued over what the entire area around the tracks—both the east and west sides —should be referred to when it came to the important service of mail delivery. For the next nine years, the post office was moved back and forth across the railroad tracks. Whichever side of the tracks it was on determined the town’s name—either League City or Clear Creek. Eventually, in 1902, the town officially became League City and has been named that ever since.

The Butler family and J.C. League eventually partnered up to make sure League City grew into a thriving community with a bank, saloon, hotel, and doctor’s office. The two also collaborated on beautification efforts, which led to one of League City’s most recognizable landmarks—its oak trees. In 1907, League organized the shipment of two railcars full of live oaks to be shipped in. With the help of G.W. Butler and his son Milby, the trees were planted along the main roadways, sold to property owners, and donated to families who could not afford to buy one. These hundred-year-old-plus trees, known as the Butler Oaks, still grow along Main Street and the surrounding streets in the League City Historic District. Recently, two of the trees planted in League Park had to be cut down because of severe damage from fungi and wood-boring beetles. Luckily, League City was able to save the wood from the two trees and they are being turned into four wood sculptures.

To learn more about the public art project, watch this short video.

Click here for more information on League City’s history—from its original Indian inhabitants and railroad and ranching enterprises in the 1800s to the Italian and Japanese immigrants who arrived in the early 20th century.

As part of League City’s upcoming 60th anniversary milestone, the City unveiled a bronze statue of J.C. League that is located on the very land he donated over 100 years ago for the creation of a public park. In October of 2021, staff members —as part of League City’s new Public Art Initiative—commissioned professional sculptor Lori Betz to begin the creation of the statue. Betz has created bronze sculptures for numerous cities including Pearland, Pasadena, and the Allen Brothers in front of Houston City Hall.

From historic photos and research surrounding League and his family, to the clothing and fashion of the period in which he lived, the development and creation of the sculpture has been a team effort involving Betz, League City’s history librarian, members of the League City Historical Society, and local artists who serve on the Keep League City Beautiful citizen committee. 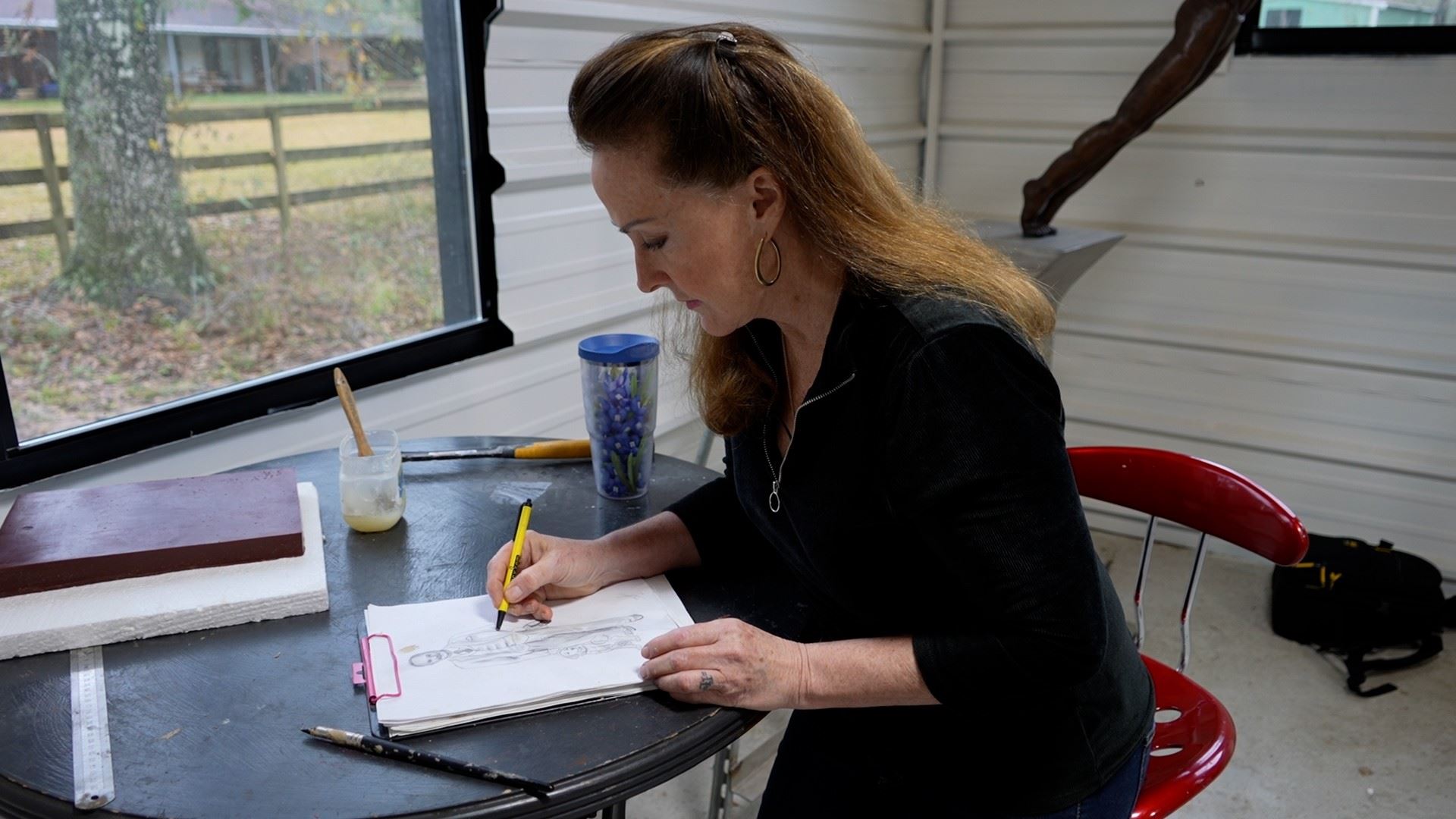 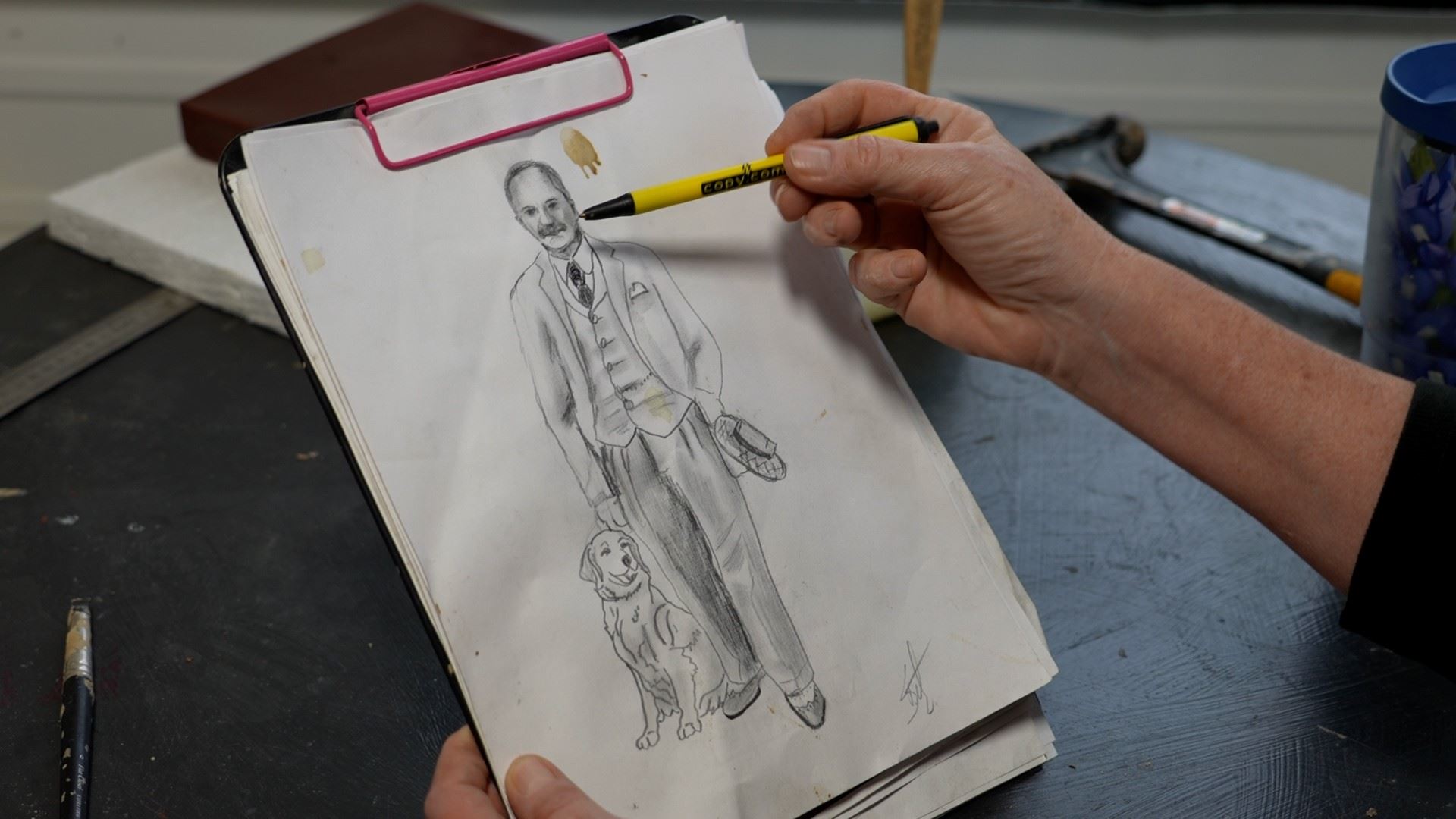 On Saturday, May 14, surviving members of J.C. League—the namesake for the City of League City—joined Mayor Pat Hallisey, fellow councilmembers, city staff, and members of the League City Historical Society, Parks Board, 4B Boards, and the Keep League City Beautiful citizen committee to dedicate a six-foot bronze statue to honor J.C. League’s contributions to establishing and building our community over 120 years ago. During the ceremony held at League Park, League’s great-great-granddaughter Nancy Dunn and great-great-grandson Waters Davis IV spoke about League’s love for his daughter Sarah, who was nicknamed Daisy, and his passion for people, pets, and philanthropy, as well as his penchant for hats. Dunn and Davis also spoke of League’s friendship with fellow Galvestonians and brothers George and John Sealy. They believe it was “a healthy competition” between the men that spurred League in the late 1800s to purchase land to create a town near an existing farming and ranching community named Clear Creek located along the Galveston, Houston, and Henderson Railroad line in north Galveston County. League then began platting out his town, dividing and selling lots of his land, while also donating a portion for a school, church, and park. In 1902, League’s township and the surrounding community of Clear Creek were officially consolidated into one and named League City. In 1907, League shipped in two railroad cars full of live oak trees to landscape and beautify the town. These trees still exist today along Main Street, League Park, and throughout the city’s Historic District.

Also present at the dedication ceremony was Lori Betz, a professional sculpture artist commissioned by League City to not only create a statue in J.C. League’s likeness but to include one of his favorite companions—his dog Scout. The two bronze pieces are mounted together on a concrete pedestal at League Park in front of the main courtyard. A metal plaque will be added to the statue in the coming months, along with an informational sign about League’s life, legacy, and several hidden items or “Easter eggs” placed throughout the two statues. They include a daisy on League’s lapel in honor of his daughter and a live oak tree on his pocket watch to recognize his efforts in planting oak trees throughout League City. Stop by League Park to see the two statues and take pictures with Scout and J.C. League. 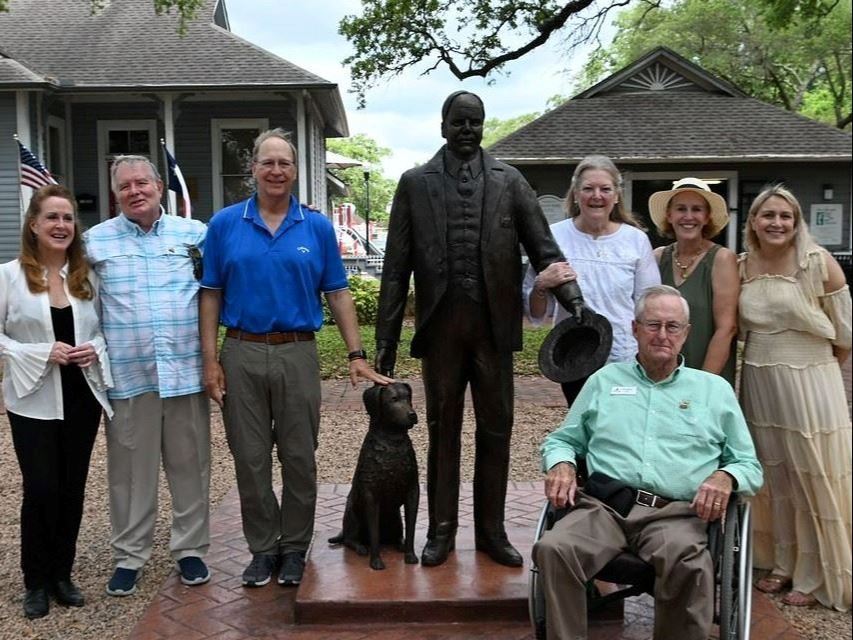